My name is Andy C. Wood and I am an independant game developer. My duties with Lithic and on Dwarrows are in design, art, and project management. I am also going to be heading our social media and marketing efforts, so if you like what you see in this game, you’ll be getting to know me. 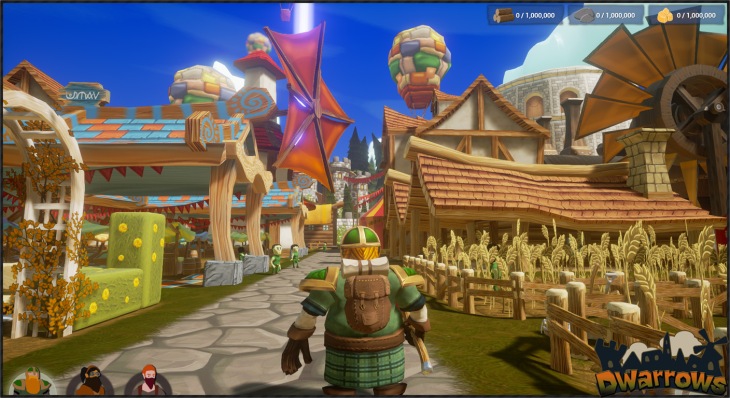 As you can tell from all the titles I have in my introduction, we are a very small team. Officially, I am the only full-time member. Our programmer sweats away like a workhorse in all of his free-time, which roughly adds up to a bit more than part-time hours on the project, and this is pretty impressive, considering we’ve been muddling around with this schedule for 3 years. We also have a floater who studied multimedia and works part-time to bravely take on tasks which rarely ever fall into the same job description as the last.

Dwarrows has been a really long RPG boss battle where the boss takes on multiple forms and you didn’t level up enough before starting it. This is why you need to stock up on “Phoenix Downs”, kids.

My partner Alain Bellemare and I started knocking around an idea back in 2011 for a game, that to summarize, was basically a third-person Dwarven Fortress. At the time, I was still in college studying animation so I wasn’t much help yet and I probably did little more than brainstorm and add to the scope of the project with grandiose ideas of our first big title. The game was mostly concept and testing in Unity with some programmer-art but it was enough for our naive selves to feel motivated enough to continue with this idea of a “Dwarf-game” when I finished school.

Straight out of school I was hired to work as a project manager on a post-grad grant associated with my college and a local historical site because of some PM experience I had with a group project that we did in our final semester. On the grant, I managed a team of 8 artists and two animators for an augmented reality experience that was built in Unity. I’ll keep it brief, but that experience ended up being both tremendously positive and negative, but ultimately an extremely educational one. I was forced to take on roles I never thought I would such as makeshift network administrator to Executive Visionary of Toilet Paper Experience Operations (a self-given title for the exemplary work I did maintaining the flow of that white, 2-ply, spice to the women’s washrooms.) Not to mention the experience as a project manager would really help when I was gunning to start real development on a project of my own.

The 8 month stint on that project led to two more Unity-based augmented reality grants. The entire span of all of these grants was two-years off and on. When I wasn’t employed on a grant, I was working on Dwarrows, which, if you remember my boss-battle metaphor, was in an entirely different form.

Roughly around the time that I was finishing up the first grant project (December 2012) we were finally deciding on where we wanted to go with Dwarrows and it was no longer a 3rd person Dwarf Fortress, but a multiplayer, team-based, tower-defense where you collected resources to upgrade your castle as well as your defenses, all the while organizing an effort to destroy the other team. The setting was a happy, lush forest by day, but a monster filled danger-zone by night (inspired by Kithicor Forest in the original EverQuest.). The players had to make the choice at night to stay in the safety of their castle and build new defenses or take a risk and brave the dark forest where they could be spotted by the invincible Naek, a tall, slender, and all-black, creature that would grab your character and slowly drag them off to drown them in the river. This would waste precious time and a run into the night could wind up being a setback for the team, but if the player successfully eluded the Naek and managed to gather gold and other precious resources, the team could get really far ahead of the other.

Even now, I still think this is a great idea. But that’s just it, it’s just an idea and ideas are cheap. The value of a game is not in it’s great underlying idea, but in the execution of that idea. This was an extremely complicated game to make and adding to the fact that we wanted it to be multiplayer. Yeeesh. Plus, we were making it in the “free version” of the Unreal 3 Engine. Have you ever tried to do networking in Unreal 3 with zero access to C++? Al hated working on it and I had frustrations and limitations as I was so freshly out of college. The anger towards the engine and the frustrations with how slow everything was moving really started to show through in our work and when we reached a major milestone, instead of being happy we realized we disliked the game we were making and we probably wouldn’t play it ourselves. In execution there were a lot more holes in our design than we anticipated and we were like that little dutch boy trying to plug our fingers in the dike, only to have two more leaks spring up.

This is when we realized we needed to abandon the game we worked on for over a year. We had it in a playable state, with artwork and characters; we had even hired a voice actor to be the gameplay narrator. But this game was such a monstrosity, a mess made from lack of full-time hours and inexperience. I’m still proud of it and I still consider it a finished first game, but I knew it was going to be a flop and it wasn’t going to be worth it to get it into a shippable state. We decided to cut our losses and try to salvage what we could from the wreckage. We kept the art-style, some game design ideas, environment assets, character models, and animation sets, and we set sail in the newly released Unreal 4 Engine with a much more cohesive and realistic idea this time. Although really, really, close: this was still not the final form.

Fast forward through a few developed and tested gameplay ideas we built, disliked, and abandoned. We were finally settled on the idea of a 3rd person town-building game that allowed the players to take control of the characters who would manage and support the town. The forest surrounding the town would not be a barren place filled only with resources for the player to exploit, but a handcrafted environment of adventure and dungeons to puzzle through filled with strange eccentric characters to encounter. 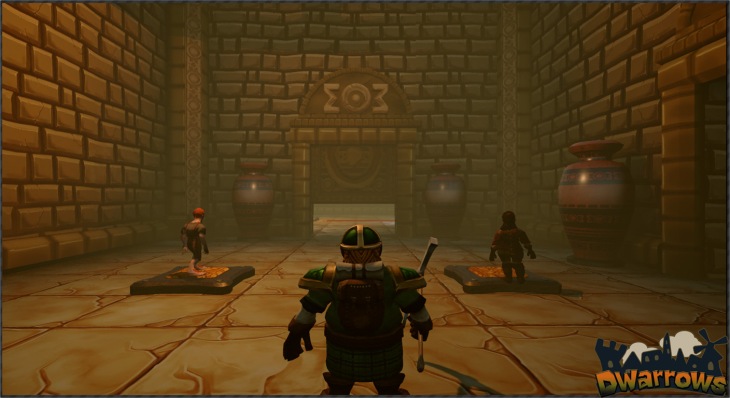 We kept the three playable characters and their functions from the original Dwarrows and applied them to our new game. The Gnome whose building-genius would take control of the development efforts, the Dwarf who collected resources with his arsenal of axes, and the Halfling whom as an expert treasure hunter possessed the skills to adventure and explore. They would work together, but separately. This same concept would be applied to the dungeons in which the puzzles require all three characters (similar to Trine). In the forest and dungeons, the team would encounter new equipment which would change and improve the gameplay (like a metroidvania) for both the adventuring and the town building portions.

We were finally happy with this idea, but a few months in there was just one problem: in all this game making, prototyping, grant and side-contract working our skills had improved. Why was this a problem? All of our older work was now unsightly to us and in my case in order to keep a unified look I would necessarily have to make worse art than I was capable of producing. For me, this was a setback of months. I managed to work out a happy compromise of sticking to the original art style while improving everything that I made.

I heard a piece of advice from Mike Krahulik of Penny Arcade, or was it Ken Levine of Bioshock fame? A quick, lazy google search is making me think they both said it in one form or another. “Be too stupid to quit”. This is what I kept replaying in my head every time things got daunting, every time I felt like the whole project was going to implode on me, every time I woke up briefly from my stupor to realize how unlikely it was that it would go anywhere or how I’m working my twenties away on a chance at an opportunity to maybe get to be roasted by online comments: I told myself this over and over, I repeated it to my small team, I repeated it to my partner, I wrote it in my diary.

This entire blog post has been about making mistakes and about bouncing back from them and continuing. Every step of the way, every choice I made, I made sure to let that phrase ring through my senses. It’s not as if we never heard advice pertaining to the mistakes we made before we made them, but there is a difference between understanding something and really “getting it”. Sometimes, you have to experience it yourself, and sometimes the advice-givers aren’t right. It’s hard to tell and you have to be willing to take risks. 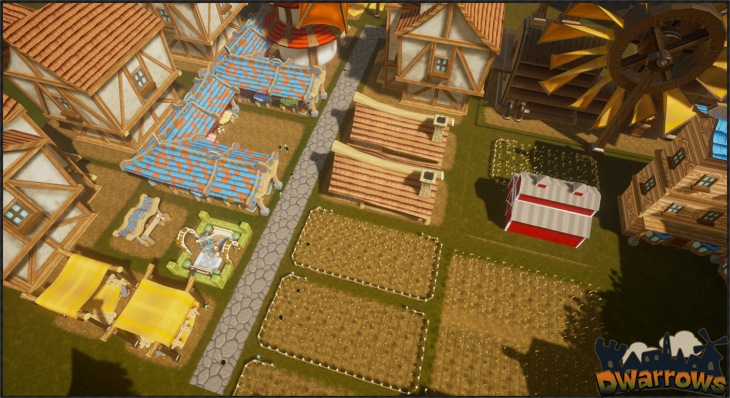 There is always someone trying to tell you “no”, trying to keep you from trying because you are likely to fail. Failure is only failure when you quit. If you fall and then pick yourself up, figure out what you did wrong and try to not do it the next time, that is called learning. You can’t let yourself be bogged down by the fear of failing, or all the advice and better-judgement that might convince you to take a safer route. If you have a dream that you really, really want to achieve you have to turn off all of those voices in your head telling you all the reasons “why you shouldn’t” and be just dumb enough to attempt it again despite all statistics and data. As long as you come up for air every once in awhile long enough to honestly analyze yourself and your project, I really do believe in this “method” because the odds can be crushing and overwhelming.